I have a fibroid that was blocking my cervix. I was told that I would have a ultrasound at 37 weeks and if Micah had turned to be head down instead of transverse and she was making progress past the fibroid then I could try to have a vaginal birth. At my ultrasound not only had she turned but her entire head was past the fibroid. The doctor said I could try for a vaginal birth but there were some risks involved: hemorrhage, labor failing to progress due to the fibroid which would cause me to end up with a c-section, more painful contractions that would cause me to want to get pain medication, and Micah’s shoulders could get stuck. Me and my midwife agreed that due to the risks I should change my plan from giving birth at Puget Sound Birth Center to Group Health Hospital in Capitol Hill.

On December 17th at 5:30 am I woke up with sharp pains. I thought they were contractions but I wasn’t sure because they didn’t hurt as much as people say they do. I didn’t want to bother Jason in case it was false labor but I called him anyway as he was on his way to work to let him know. He told me to wake up my mom if they kept coming. The contractions kept coming pretty close together so I called my midwife, she asked some questions and told me to call her when I was ready to go to the hospital. I went ahead and woke up my mom and she got on the website contractionmaster.com to time my contractions. Once she saw they were about two minutes apart she was ready to take me to the hospital. I called my doula’s apprentice and asked her to come over. I worked through different positions, focused on breathing, and hummed to deal with the pain. My doula’s apprentice did a great job of applying pressure to my back during the contractions and her calm nature helped calm my mom. Once Jason came home he did a great job encouraging me and helping in any way he could. Jason called my midwife and she said we should get headed to the hospital. I was getting contractions where I felt the urge to push, me and Jason thought it was too early to push so I tried not to. I needed to make my way to the hospital but the contractions were coming so fast I didn’t feel like I was getting much of break to be able to make the 30 minute drive so we stayed home for maybe another hour. (I kept my eyes closed for the majority of my labor and I didn’t want to know the time so I have no concept of the time.) I know we made it to the hospital at 11:30 (Jason told me later) and I was wheeled up to triage. When I got there the nurse kept dropping my chart so I knew this was not going to be a fast process. Not to long after I was in triage my doula came, she noticed I was trying not to push during the contractions and she told me it was okay for me to do what my body was telling me to do, she asked the nurse if they had checked me yet. The nurse checked me and I was fully dilated she told me they could catch my baby there or take me to labor and delivery, I wanted to be moved. A doctor came and introduced herself telling me she would catch my baby if my midwife didn’t make it in time. I made it down to my room and started pushing, my midwife made it in time. My water broke as I was pushing her out and I was told that it was a little brown so Micah would go straight to the pediatrician. I was also told that she was face up with her chin sticking up so I would have to work hard to get her out. With each push I held on to Jason yelled in his ear and scratched his neck. At 1:01 pm Micah was born, it didn’t seem like she went to the pediatrician because she was on my chest so quick. I ended up needing some watered down pitocin in order for me to get the placenta out (which I was told may happen due to the fibroid) but I was fine with that because I was glad that Micah hadn’t received any drugs. 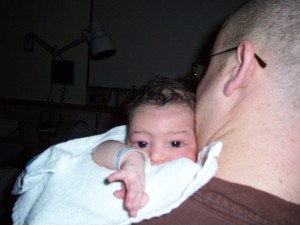 I had a great birth I’m so happy that my body worked so well for me to be able to have such a fast natural birth and I have a beautiful healthy baby girl. I started prenatal yoga and walking for 45-60 minutes 3-4 times a week during my second trimester, and I think doing those things and the relaxing techniques I learned in the Bradley class contributed to my labor being the way it was. 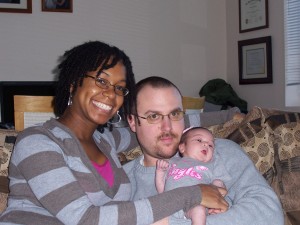